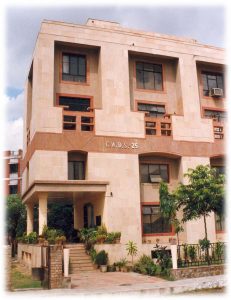 CWDS was established in April 1980 by a group of men and women tasked with preparing the first comprehensive public report on the status of women in India entitled Towards Equality (Report of the Committee on the Status of Women in India, Government of India). Subsequently, the group was associated with the Women’s Studies program of the Indian Council of Social Science Research (ICSSR). The ICSSR Advisory Committee on Women’s Studies recommended the establishment of an autonomous institute with a wider mandate and resources to build on the knowledge generated towards expanding research and advocacy. Upon acceptance of this proposal by ICSSR, CWDS began functioning with a small grant from the Vikram Sarabhai Foundation under the leadership of Prof. J.P. Naik. Dr. Vina Mazumdar and Dr. Phulrenu Guha were respectively, the Centre’s first Director and Chairperson.

Upon the recommendation of a visiting committee appointed by the Indian Council of Social Science Research (1984-85) CWDS began receiving an annual maintenance grant from the ICSSR and was subsequently recognized as an autonomous research institution supported by ICSSR.