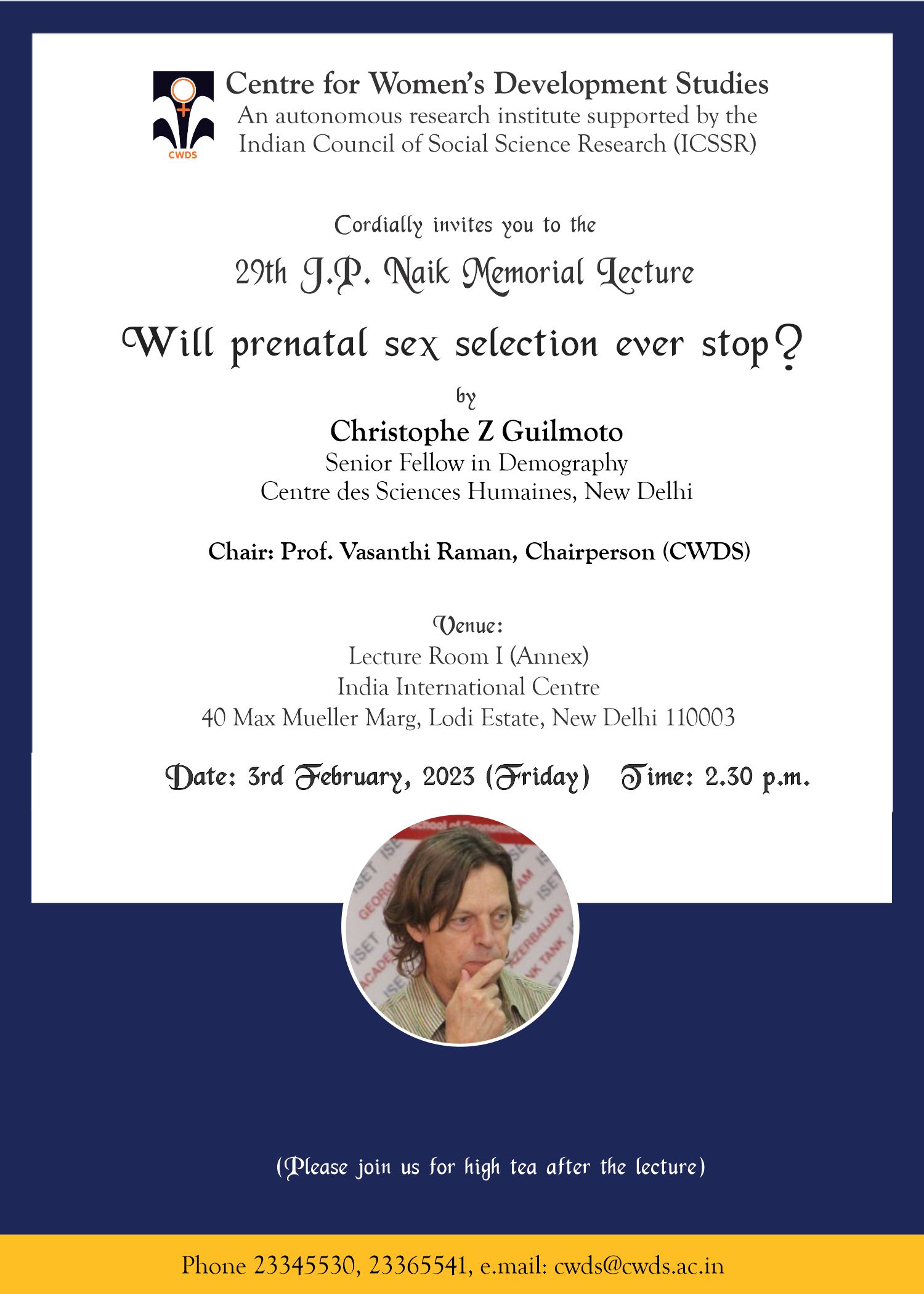 Christophe Z. Guilmoto is a senior fellow in demography at the French  Institut de recherche pour le développement  (IRD) attached to  CEPED  research unit in Paris and he has joined the CSH in 2021 to work on the demography of inequalities. In France, he taught at Université Paris Descartes and at EHESS. He was trained in Mathematics and Sociology. From 1983 onward, he then worked at MIDS in Chennai, the IEG in Delhi and the EFEO in Pondicherry and received a PhD in Demography in 1989 at Paris I University for a dissertation on India’s historical demography. He conducted field surveys in Senegal in 1991-94 and researched on international migration. At the turn of the century, he was based at the French Institute of Pondicherry and published mostly on fertility decline in South India.

Over the last decade, his research has focused on prenatal sex selection, starting with India’s and China’s experience. His current work also covers Southeast Asia, the Caucasus and Southeast Europe, with an interest for both theoretical and estimation issues related to these sex imbalances at birth. He has since then organized several conferences, panels and training sessions on the prenatal sex discrimination in France, Georgia, India, Japan, Malaysia, South Korea, Turkey and Vietnam. I have written more than ten monographs on gender-biased sex selection in various countries. Also, he is the author of the first global report on sex mbalances at birth (UNFPA 2012) and recently contributed to the 2020 UNFPA report on Harmful Practices. His last edited book is Demographic Transformation in China, India and Indonesia (with Gavin Jones, Springer 2016) and his recent publications have appeared in Population Studies, Population and Development Review, Population, The Conversation, PlosOne, the JAMA and the Lancet Global Health.

Prenatal sex selection proved initially difficult to identify after high proportions of male births were first noticed in some Asian countries in the 1980s. It first took years for statisticians to agree on the magnitude of sex imbalances at birth and the role played by sex-selective abortions in them, and even more years for governments to acknowledge the presence of deliberate elimination of female births. The interpretation of a phenomenon observed in India–but also from Albania to South Korea–was no easier in view of the cultural, economic and political diversity of affected countries and the multiplicity of potential local factors, ranging from family planning policies and dowry to political crises or conflicts. While son preference (or daughter aversion) is at the core of prenatal sex selection, we need to recognize the contributions of other factors such as smaller family size (the so-called fertility squeeze effect) and the emergence of prenatal sex diagnosis tools such as ultrasound.

But can the retrospective understanding of the emergence of prenatal sex selection help us to foresee its future evolution? It is time to wonder if after decades of sex imbalances at birth in several countries from Eastern Europe to Eastern Asia, we are in a better position to anticipate the future course of sex selection. As is common with demographic matters, government interventions are expected to correct population issues and the gradual introduction of policies targeting sex selection—starting with India’s Pre-Conception & Pre-Natal Diagnostic Techniques Act rolled out as early as 1994—was supposed to reduce the propensity of couples to resort to sex selection. But in view of the modest effectiveness of these policies, the prognosis for future reductions in sex imbalances at birth may appear less optimistic. After all, fertility in many affected countries has become or remained very low—often below the replacement level—and should continue to exert pressure on parents who want a son. Similarly, access to sex-selective technologies has gradually improved due to the expansion of the private healthcare system. Finally, there is no forceful theory for a downturn in son preference as women’s condition was on the whole already improving decades ago.
This presentation will look at the various trajectories of the sex ratio at birth across the world to try and decipher its specific patterns. We show that somewhat independently of the pace of local socioeconomic change or of government interventions, sex imbalances appear to invariably level off at a high plateau level—corresponding to a deficit of female births of 5-15%—and to start declining subsequently. This regular patterning can be even replicated statistically by using Bayesian tools and the latest forecasts point to a future downturn of prenatal sex selection and its probable disappearance within the next two decades.

We will argue that factors endogenous to the initial rise of sex-selective abortions may account for its ultimate downturn and a return to normalcy. While offering a somewhat optimistic assessment of the apparently spontaneous evolution of sex imbalances, this interpretation should not minimize their lasting impact of the age and sex structures of affected populations or underemphasize the massive marriage squeeze mounting in countries such as China or India.